When the Mayfield organ was built, J.W.Walker and Sons Ltd were led by Andrew Pennells, the director. The company, was at that time, what is referred to as, a brass-plate company. Based in the same building as P&S Organ Supply Co., JWW had no manufacturing premises of its own. Complete instruments were manufactured by P&S, and given JWW nameplates on the console (where the organist plays). P&S manufactured complete organs for clients all over the world, particularly for the USA. P&S and JWW were owned by the same parent company, under the direction of Andrew’s father, Robert.

Pipework for new instruments was bought in from a number of trade supply houses, most notably at this period from Carl Giesecke Gmbh, of Gottingen, Germany. That was no bad thing, because they worked to very high standards, and the pipes are very precisely made, probably superior to English pipe makers. Andrew would have been very familiar with their style of work from his time spent with Klais of Bonn (Bath Abbey) as a younger man.

By 1997, Walkers no longer had the services of two key voicers, Michael Butler, who voiced reeds (trumpets, Cremona, Hautboy, and trombone), and the very talented Paul Fulcher, who set up his own shop in America. The Mayfield three manual organ falls into a period between the departure of these two, and the appointment of David Wilson as tonal director. It therefore seems likely that the Mayfield pipework was bought already voiced from Giesecke, put straight in the organ, leaving just the tonal finishing to be done on site. Andrew Pennells would have worked closely with Geseicke, and he was the person that decided on how the organ was going to sound, so he personally would have decided on pipe dimensions, pressures of wind, mouth shapes, choice of metal, and reed shallot dimensions, etc.

The method of pre-voicing is still used by many firms, but does not compare favourably against voicing on site for the very best results. For example, Marcuse’s voicer at Tonbridge School Chapel, Olaf Ousseren, spent five months on site in 1995, voicing and finishing the organ, meticulously.

Shortly before his death, Andrew had decided that he wanted to build instruments more customised than the strictures of P&S’s manufacturing allowed him, and he was looking for a new premises that JWW could use to this effect. Sadly, this never came to pass as Andrew succumbed to cancer.

This, hopefully, gives one an insight as to how the organ came to be, and perhaps why the finished result was not quite what the originator had had in mind.

When the organ was commissioned for St. Dunstan’s, a considerable amount of money had to be raised for the purchase of the organ, and so a National Lottery grant was bid for. While the application for the bid was taking place, the congregation of St. Dunstan’s managed to raise the amount necessary for the purchase of the organ, but because the wheels in motion for the bid had already started, Mayfield had to accept the money from the National Lottery Grant anyway. This money was put in an Organ Fund, which is overseen by the Organ Trust, and is used for tuning, and keeping the organ in fine fettle.

Because of the advancements in technology, and general feedback from recitalists, the Organ Trust decided to enlist the expertise of an Organ Consultant, Paul Hale, simply to get an overview on what the organ was like, and whether any alterations, mechanically or tonally, were going to be needed to make it do its job even better.

This, therefore, turned into an extremely interesting project, and a few options came to light as a result of Paul’s findings. The idea of a loud trumpet stop at the West end (more American than English) was rejected as being impractical, and also unsightly, but other options came forward which were much more subtle, and would build on many of the organ’s strengths.

One of the biggest facts that were discovered, as Paul went meticulously through every stop, was that the Great 8ft Stopped Diapason flute was really not as good as Walkers is renowned for. It is the first stop that one hears on the Great as the organ slowly begins to build up, or the last stop on the Great to be heard before playing on the swell. It is also a really important stop for accompanying solo sounds on the swell, such as the Cremona, or the Hautboy, and so it is a really crucial stop. It was decided that it should be replaced by a brand new one. Also the balance between the flute stops on the Great was not good, and this has been addressed.

Other thoughts were of the loudness of some of the stops, especially on the Swell. One has never been able to get the organ to be really quiet, so a few softening adjustments to the swell Salicional, and Voix Celeste (which should both be the softest stops on the organ) were made. Also the 4ft Flute was found to be louder than the 8ft Gedeckt Flute, so this was adjusted for the right balance. The 4ft Principal was found to be softer than it should have been, so this was made louder, and lastly, the mixture (which adds brilliance) was found to have space for more ranks of pipes. It was decided to complete the ranks of this stop.

Any new pipes that have been put in the organ, come from Shires Pipework Company of Leeds, and they make pipes for Mander (who look after St. Paul’s Cathedral Organ) and Kenneth Tickell (who have built the new organ in Worcester Cathedral), amongst others. All the pipes are totally in keeping with what Walkers would have done at the time that it was built.

What do these changes mean for the listener? The organ should now be able to get quieter, and there are more subtle combinations of stops to accompany the choir. The swell chorus should sound more cohesive and fuller, and we can delight in the beautiful tones that now come from the new Flute on the Great.

For the player, there are some better aids for changing stops, which should make more variety of sounds to be heard, and now, there is even more choice for different combinations of stops to delight the listener.

We hope that you will agree, that this has been time and money well spent, as the alterations have benefited listener and player, but far more important, in the completion of the tonal balancing of the organ itself.

Huge thanks have to go to Paul Hale for his expertise, and also to Martin Cross and Richard Shepherd, who carried out this work, on time, and within the budget.
The Organ Trust is to be congratulated on its forward thinking for the organ for years to come. 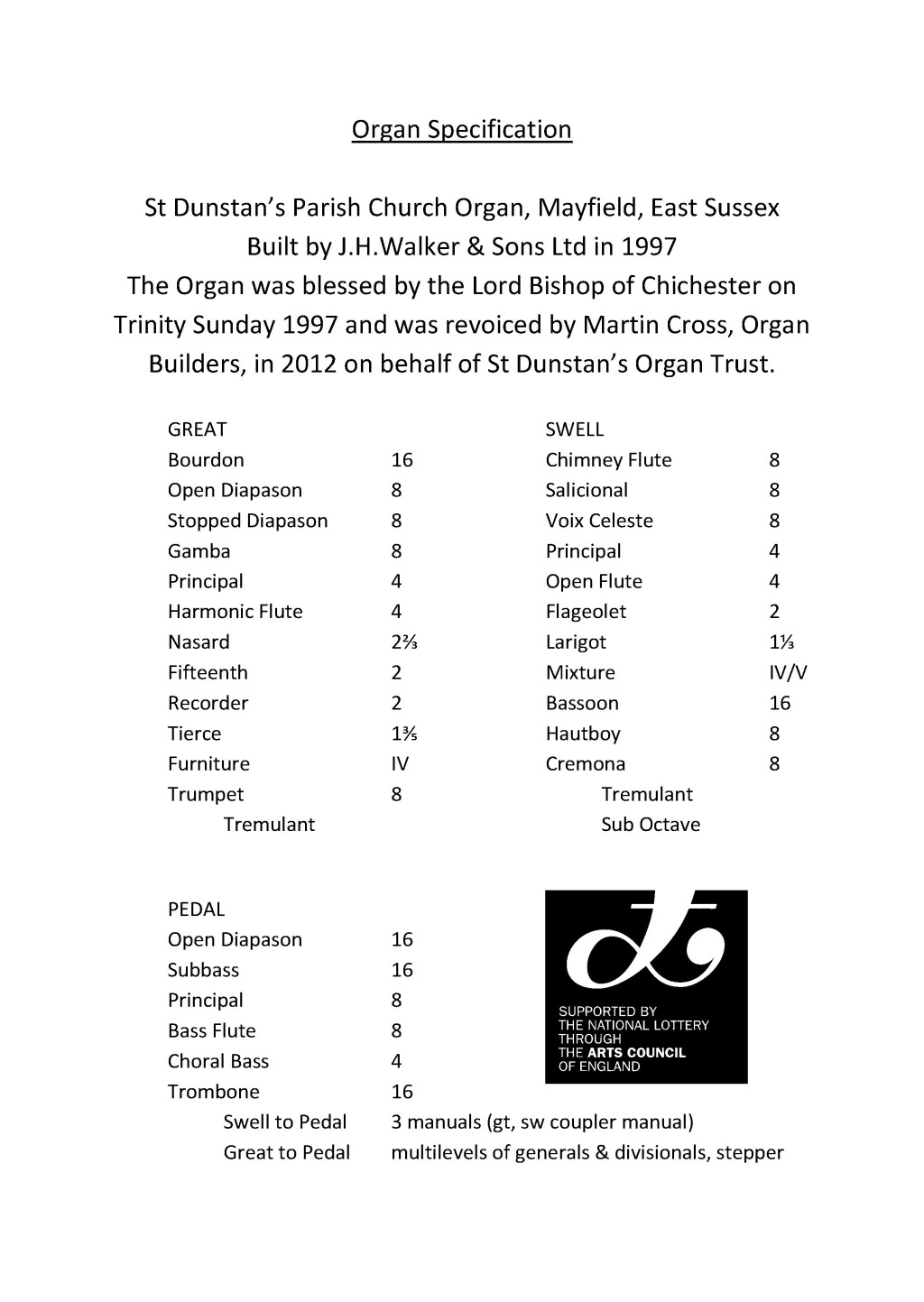